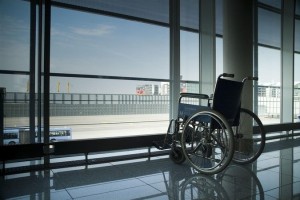 On 5 March 2014, the UK Supreme Court delivered a remarkable decision. It denied a passenger’s claim for damages from an airline for a violation of a fundamental right under Regulation (EC) No. 1107/2006 (the EC Disability Regulation) because the Montreal Convention 1999 prevented this. What does this decision mean for passengers who want to enforce their rights under this regulation? And what will the long-term backlash be for the Montreal Convention 1999?

Mr. Stott booked a return flight with Thomas Cook Tour Operators from the UK to Greece and went to great lengths to ensure that he and his wife would be seated together. The reason for this is that Christopher Stott is severely disabled which makes him dependent on his wife during air travel. However, when they checked in in for their return flight to the UK, they were informed that they would not be seated together. Mrs. Stott, who was seated behind her husband during the flight, had great difficulties in taking care of her husband. The crew did not offer any help or assistance.

The leading principles of the EC Disability Regulation are universal access and non-discrimination (the latter is vested in Article 21 of the Charter of Fundamental Rights). All citizens should benefit from air services and disabled passengers should have the same opportunities as other citizens.

Under the regulation airlines are obliged to make all reasonable efforts to give an accompanying person a seat next to the disabled person, without additional charge (Article 10 in conjunction with annex II). In the case at hand this meant that Thomas Cook Operators was under a legal obligation to do everything in its power to seat Mr. and Mrs. Stott together. Backed by the Equality and Human Rights Commission, Mr. Scott claimed (aggravated) damages for injury to his feelings caused by a breach of the UK and EC Disability Regulations.

At first instance, Manchester County Court decided that the EC Disability Regulation had in fact been violated and that he would have awarded ₤ 2,500 if the Montreal Convention had not prevented him from doing so. The court therefore rejected Stott’s claim for aggravated damages due to injury to his feelings. On appeal this decision was upheld. Mr. Stott then appealed to the UK Supreme Court. The Supreme Court decided that although the embarrassment and humiliation that Stott suffered were exactly what the EC and UK Disability Regulations intended to prevent, damages were not available to him. Mr. Stott’s injuries to his feelings were sustained during the timeframe governed by the Montreal Convention, which exclusively and exhaustively provides a basis for a claim (also known as the exclusivity doctrine).

The Montreal Convention and the exclusivity doctrine

The Montreal Convention regulates the liability of the air carrier in case of international transport. The system is probably the most advanced of its kind: for death or injury claims up to (roughly) €127 000 the air carrier is liable, no questions asked. For the part of the claim which exceeds this threshold the liability is fault-based, but the onus of disproving liability lies on the carrier (Article 21 MC).

There is, however, a downside: the system only applies to certain types of damage that occur within a specific timeframe. Only damage due to death or bodily injury caused by an accident either on board of the aircraft or during embarkation or disembarkation falls under the system (Article 17 MC). ‘Injury to feelings’, the basis of Stott’s claim, is not recoverable under this article, as it does not fall under the heading ‘bodily injury’.

There is a widespread interpretation of Article 29 MC that if damage is not recoverable under article 17, it is not recoverable at all (the abovementioned exclusivity doctrine). This doctrine first surfaced in the 1970s and was crystallised in international air law in 1996 by the UK House of Lords in Sidhu v British Airways, in which passengers claimed damages for psychological injury incurred during their 3-month captivity in Kuwait and Iraq during the first Gulf War after a scheduled stopover by British Airways in Kuwait City when the Airport was literally under siege. For those who may be intrigued: watch this video.

In Sidhu the House of Lords decided that the purpose of article 17 and 24 Warsaw Convention was to prescribe the only circumstances in which a carrier would be liable towards the passenger for claims arising out of international carriage by air. One year later the US Supreme Court confirmed the exclusivity doctrine in El Al Israel Airlines v Tseng. A year after that the Montreal Convention 1999 was concluded, in which Articles 17 and 24 Warsaw Convention were taken over verbatim. From then on the exclusivity doctrine seems, at least on the surface, to have become firmly rooted in international air law.

The European Union and the exclusivity doctrine

The European Union adopts a rather ambiguous position towards the Montreal Convention. On the one hand, the Union has strongly advocated it, for instance by becoming a party to the convention and incorporating it into European law by Regulation (EC) No. 889/2002. On the other hand, it immediately started establishing passengers rights regulations. Although the purpose of the Union is admirable (it put flesh on the bones of consumer protection in the transport sector) the passengers rights regulations could at the same time seriously undermine the convention since both systems pertain to the same (contractual) relationship between the air carrier and the passenger, which makes collisions likely to occur.

In relation to the sister-Regulation (EC) No. 261/2004 such collisions have in fact occurred. So far the ECJ perseveres in its view that the Montreal Convention and the Regulation are two separate instruments that are not in conflict with each other; see IATA and ELFAA and Nelson and TUI Travel. It is equally steadfast in ignoring every direct or indirect question about the exclusivity doctrine (see for a more elaborate discussion Koning in The Influence of European Law on Dutch Private Law, Forthcoming).

Between a rock and a hard place?

The Supreme Court emphasised that it shared the regret of the lower courts that damages are not available and it echoed their sympathy for Mr. Stott. It gave the impression that it had become stuck between a rock and a hard place. In the light of the course which the ECJ has set out under Regulation 261/2004, the EC Disability Regulation indeed appears to be a seriously big rock. But it was the UK Supreme Court itself that created the hard place. It failed to address the serious criticism which the Sidhu and Tseng judgements have generated. Furthermore, it referred to a number of cases that, upon further examination, might very well not to be examples of its own ‘strong’ exclusivity doctrine.

The distinction between strong and weak exclusivity, which first appeared in Canadian blogs on this subject, in my view perfectly reflects the reality that there are different shades of exclusivity. The legislative history of the Warsaw Convention and the wording of Article 29 Montreal Convention speak of a more nuanced concept of exclusivity which would permit claims outside the convention, albeit subject to the conditions and limits of liability as are set out in it. This ‘weak exclusivity’ represents a middle road between the ECJ‘s total denial of any form of exclusivity and the ‘strong exclusivity’ doctrine of the UK Supreme Court.

And the winner is…

There are no winners in this matter. Mr. Stott obviously lost. His only remaining option is (probably?) to bring his case before the ECHR.

Disabled passengers lose as well: The UK Supreme Court has sabotaged any claim for damages for a breach of an airline’s duty under the disability regulation. Relying on public enforcement by the National Enforcement Bodies (NEBs) is not an attractive prospect considering the wide array of sanctions and enforcement intensities (or the lack thereof) in the European Union (see the September 2010 Report on the assessment on rules on penalties applicable to infringements to Regulation (EC) 1107/2006).

In the end, all passengers lose. Both the total disregard of the exclusivity doctrine by the ECJ as well as the unequivocal denial of any criticism towards it seriously destabilises the balance and the compromise that the Montreal Convention represents. Equally dangerous, in my view, is the suggestion that the Montreal Convention ought to be amended. If history teaches us anything, it is that it has the tendency to repeat itself. It was the Warsaw Convention’s first amendment without the diplomatic backing of all signatories that quickly caused the collapse of the whole system. It took fifty years and a brand new convention (i.e.: the Montreal Convention) to recover from this. Lets not repeat that process.