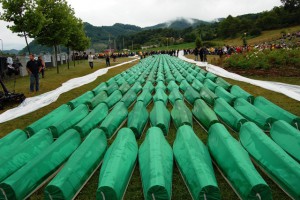 On 29 April 2015, the Military Chamber of the Court of Arnhem-Leeuwarden dismissed a complaint, filed by relatives of victims (Mustafić, Nuhanović) of the Srebrenica massacre, against the Dutch public prosecutor’s decision not to investigate the Dutch military commanders (2013) for murder, war crimes and genocide. The (three) commanders of a Dutch battalion (Dutchbat), deployed under UN auspices in the Srebrenica area, had, according to the plaintiffs, expelled the victims from the Dutchbat compound knowing that they would in all likelihood be killed by Bosnian Serb militia under the command of Ratko Mladic. This post will endeavor to illustrate that, in reviewing the prosecutor’s decision to dismiss, the Court whilst appearing to reach its decision through the application of different law, actually based its jurisprudence on a de novo understanding of the facts compared to the earlier civil cases regarding for the same facts in relation to international civil law (State responsibility). It is recalled that, in the proceedings against the State, the Court of Appeal of The Hague held the Netherlands liable in tort for (the commanders) sending the victims off the compound on the ground that, in so doing, the State exposed them to a real and foreseeable risk of being killed or mistreated (Mustafić and Nuhanović 2011). This judgment was confirmed by the Supreme Court (Mustafić and Nuhanović 2013). In the Arnhem Court case, however, it was ruled that, in respect of those same facts, there was no basis for a criminal investigation because the establishment of individual criminal liability differs fundamentally from the establishment of the State’s civil liability (para. 12.4).

To what extent, and on what grounds, these liability standards diverge is not made very explicit, but, from the Court’s reasoning, it can be deduced that the mental element (mens rea;  knowledge/intent) is crucial in this respect as the material element – the actual acts committed or omitted – is the same in both proceedings.

In the 2011 and 2013 civil cases against the State, fault was not based on the establishment of an internationally wrongful act, under public international law, but was rather based on Bosnian tort law, via the applicable law rules of Dutch private international law. The tortious acts committed by the commanders were then attributed to the State through the public international law norms of State responsibility, under Article 7 (then 6) of the final Draft Articles on the Responsibility of International Organizations, that the State has effective control over the acts in question. The court therefore applied a dépeçage, applying the norms from two different legal orders to a legal question normally governed by one coherent set of norms (see B. Boutin, ‘Responsibility of the Netherlands for the Acts of Dutchbat in Nuhanović and Mustafić: The Continuous Quest for a Tangible Meaning for ‘Effective Control’ in the Context of Peacekeeping (2011) 25 Leiden Journal of International Law). The 2011 cases rejected any claim of complicity under the Genocide Convention and other international instruments on the basis that no separate claim was made under these standards compared to those made under Bosnian tort law (Mustafić para. 6.22; Nuhanović para. 6.22) and that these standards were considered to be subsumed into Bosnian tort law (Mustafić para. 6.4; Nuhanović para. 6.4).

In applying Bosnian tort law, the Court based its decision on the determination that: (1) that there was a causal link between the actions taken by Dutchbat and the deaths of Mustafić and Nuhonovic, (2) that Dutchbat should have known, based on the facts available, that there was a ‘real and foreseeable risk’ of the subsequent events taking place and (3) that Dutchbat had not taken reasonable efforts to take alternative courses of action that would have prevented these events from taking place. The Court thus ruled that the commanders could not have drawn any other conclusion than that the men who would leave the compound would run a real risk of being killed or at least inhumanely treated (Mustafić, para. 6.7) and that it was foreseeable that Ibro Hasanovic would opt to accompany his minor son Muhamad outside the compound, even if Ibro had Dutchbat’s consent to stay on the compound (Nuhanović, para. 6.20).

The Arnhem Court correctly relied on the case law of the Yugoslavia Tribunal in assessing the claims that the Dutchbat commanders were complicit in genocide and war crimes and murder. In assessing complicity in genocide, the Court took the approach that ´actual knowledge´ was required of the intention of the Bosnian Serbs to commit genocide and this claim was consequently dismissed (para. 11.1) (see the ICJ Genocide Convention case). With regard to complicity in war crimes and murder, the Court concluded that it suffices that the accused consciously accepted the probability of a particular consequence of his acts (para. 11.2). Hence the standard of intent appears to be the same as that adopted in the civil cases. However, in applying the criteria, the Court concluded that accused Franken did not have the requisite knowledge that Muhamed Nuhanović would likely be killed after leaving the compound (para. 13.4) and did not force Ibro Hasanovic to leave the compound (para. 14.3); in respect of accused Oosterveen, it held that he did not have the intention to send Rizo Mustafić off the compound into the arms of Mladic’ men but that he just made a ‘stupid mistake’ (para. 15.3).

Even though, in the criminal case, an international criminal rather than national civil standard was applied, it remains that both the criminal and civil cases revolved around awareness. After all, on the basis of the awareness of the commanders the civil court had earlier held that the State acted wrongfully vis-à-vis the victims, as a result of which the State’s liability in tort was engaged, and on the basis of the commanders’ lack of awareness the criminal court held that the commanders’ individual liability was not engaged. This distinction in awareness may, as hinted at above, be explained by the civil court using national law and the criminal court applying international law. However, it may also be explained by the fact that the standards for a criminal conviction – whether under national or international criminal law – are, and should be, higher than for a judgment in tort. Indeed, insofar as there is doubt that a person’s act has caused a particular effect, based on the presumption of innocence, a criminal court may less readily establish liability than a civil court. Nonetheless, where in earlier proceedings a civil court had no doubts that a person had knowledge of a particular crime, it is certainly odd for a later criminal court to hold that the same person had no such knowledge. In the case of Franken, for instance, it would appear that, in respect of the same crimes, either he had knowledge (Hague Court), or he did not have knowledge (Arnhem Court), but that he cannot have both. It may thus appear that one court got it wrong on the facts, knowledge and awareness being objective notions irrespective of the sort of proceedings in which they play their part.

The Arnhem Court may well state that the facts correspond to those established by the Hague Court of Appeal in the plaintiffs’ civil procedure against the State (para. 12.4), in reality it reinterprets the facts in the context of its analysis of the mental element. Most conspicuously, in respect of accused Franken, the Court holds that ‘he had no knowledge, suspicion or idea that structural murder took place’, and that ‘[t]he worst he would have suspected was detention’ (para. 13.3). This factual determination is in flagrant contradiction with the earlier holding by the Hague Court of Appeal that he did have such knowledge. On the basis of the available materials, the Arnhem Court simply reviews de novo the question of whether the accused factually had knowledge (other factual questions surrounding the Srebrenica massacre obviously being part of the historical record), and thus appreciates the facts differently.

This different appreciation may have been more difficult if the Hague Court, like the Arnhem Court, had addressed ‘awareness’ from an international rather than national law perspective, but even then, it is not unlikely that the peculiarities of criminal proceedings were decisive for the Arnhem Court carrying out a de novo factual appreciation. This appreciation may well be convincing – something on which we do not take a position. But comparing the outcomes of the civil and criminal proceedings, one is tempted to conclude that one court must have gotten its appreciation wrong: it is hard to understand how a person can be aware (civil law) and unaware (criminal law) of a crime at the same time.

The respective decisions are not amenable to judicial review in the Dutch legal order – the Hague Court decision having already been confirmed by the Supreme Court, and the Arnhem Court decision not being subject to a cassation appeal in the first place. The last word may now belong to the European Court of Human Rights, to which the victims’ relatives’ lawyer may apply on the ground that the Netherlands violated Article 2 ECHR by failing to initiate a proper criminal investigation. It remains to be seen whether the European Court, when addressing the merits of the case, will be willing to second-guess the Arnhem Court’s appreciation of the commanders’ knowledge.