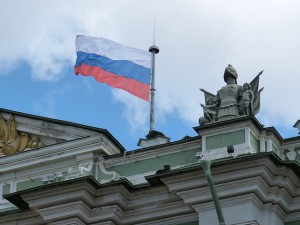 In an earlier blogpost, I reported that a number of Western states envisaged lifting the immunity from execution of the Russian Federation and seizing Russian government assets. They did so at the request of creditors seeking to enforce a 50 billion dollar award issued by a Hague-based international investment tribunal in a case about the expropriation of the Yukos energy company. Russian retaliation against these measures was to be expected. Russian pressure resulted rather swiftly in Belgium unfreezing the seizure of Russian bank accounts. Now, as reported by the Kremlin-backed news outlet Russia Today, in a move that is set to further deteriorate relations between Russia and the West, Russian President Vladimir Putin has also signed a law that allows Russia to seize assets of foreign states which wrongfully seized Russian property (for those who read Russian: the text of the law is available here). While this law could easily be characterized as the umpteenth example of Russian bare-knuckle power politics, it is nonetheless not necessarily internationally unlawful.

Going by the text of the statute and comments given by Russian officials, it seems that the international legal basis invoked by Russia is the doctrine of countermeasures. Countermeasures allow a state injured by another state’s internationally wrongful action to temporarily suspend the performance of its international obligations until the latter state complies again with its international obligations. In the case at hand, these measures may allow Russia not to respect another state’s immunity from execution insofar as that state committed a prior wrongful act against Russia, namely not respecting Russia’s immunity from execution. Everything hinges on whether foreign states indeed commit an internationally wrongful act when seizing Russian state property to compensate the aggrieved Yukos shareholders. In my previous blogpost, I argued that this question cannot be answered in the abstract. Rather, one would have to inquire whether the state property at issue is actually used for government non-commercial purposes, a principle that has also been confirmed by the International Court of Justice in 2012 (Jurisdictional Immunities of the State Case, para. 118). If the property is so used, execution measures are internationally wrongful, and hence Russia would be entitled to take tit-for-tat measures to exert pressure on the foreign state to lift its prior measures. Frankly, I consider it rather unlikely that foreign state courts would seize Russian state property used for sovereign purposes; there is no precedent for this. Even if they were to do so, they will normally be overruled by higher courts.

In this context, it is not readily clear whether, pursuant to the Russian law, countermeasures could also be taken against states when a domestic appeals procedure against an execution measure is still pending. Under international law, these sorts of countermeasures are not necessarily illegal, as the relevant provision in the Articles on State Responsibility drawn up by the International Law Commission (Article 52.2), which can be considered as codifying customary international law, allows the injured state – in this case Russia – to take such urgent countermeasures as are necessary to preserve its rights. Admittedly, countermeasures cannot be taken when the dispute is pending before a court or tribunal (Article 52.3.b), but this principle (lis pendens) only applies to dispute-settlement mechanisms which have the authority to make decisions binding on the state parties to the dispute. In state immunity appeal cases involving Russia, the forum state, say the Netherlands itself, is not a party to the dispute, as the latter involves Russia and private plaintiffs. The said principle, which applies to international (inter-state) dispute-settlement mechanisms, can accordingly not serve to disqualify Russian countermeasures triggered by a lower court’s wrongful immunity determination.

Note that Russian countermeasures do not relieve Russia from fulfilling its obligations to respect the inviolability of diplomatic or consular agents, premises, archives and documents (Article 52.b). The Russian law does not allow for these sorts of countermeasures for that matter. Foreign investors hailing from states which have seized Russian government property have little to fear either, as the law only applies to foreign government property.

My estimation is that the ultimate goal of Russia’s new law is to deter foreign states from allowing executing measures to be taken against Russian government assets, so that the law will not actually have to be used. I wonder, however, whether deterrence will always adequately work in state immunity cases. Deterrence typically works well in horizontal state-to-state relations, where one state executive tries to dissuade another state executive from pursuing a particular policy avenue. It may have less potency in diagonal state-to-foreign-court relations, as the judiciary is bound to apply the law and is not supposed to choose between different policy options. Admittedly, in many states, domestic law allows the executive to block enforcement proceedings against foreign states (for instance Article 3a of the Bailiff’s Law in the Netherlands), but even then such measures should be based on objectively applicable international law and can be reviewed by the courts. Therefore, it is not excluded that foreign courts fail to be deterred by Russian sanctions and proceed to allow execution measures against Russian assets. In such cases, Russia may not recoil from actually using its retaliation law and in turn take execution measures against foreign assets. As I observed earlier, insofar as the foreign court’s measures have been taken against Russian assets used for sovereign purposes, international law entitles Russia to do so, provided that its action complies with the law of countermeasures, in particular the principle of proportionality.