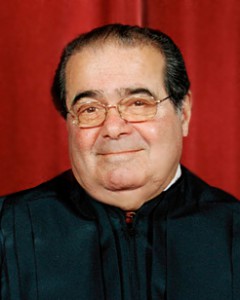 In this short blogpost, I have no ambition to parse all Scalia’s opinions for their international law relevance. Rather I will highlight two of his opinions which at first sight represent two extremes on an international law spectrum. In the well-known death penalty case of Roper v Simmons (543 U.S. 551 (2005)), Scalia famously inveighed against the use of foreign and international law sources in the US legal order, whereas in Hartford Fire Insurance Co. v California (113 S.Ct. 2891 (1993)), he took issue with the majority for not paying sufficient attention to international law in transnational antitrust liability matters. These opinions appear to be diametrically opposed, but on closer inspection they do not make Scalia’s international law philosophy inconsistent.

In Roper, the majority cited such international conventions as the International Convention on the Rights of the Child and the International Covenant on Civil and Political Rights, and foreign practice as confirmation that the death penalty is disproportionate punishment for offenders under 18 – the US purportedly being the only country in the world that continues to give official sanction to the juvenile death penalty. In his dissent, Justice Scalia was not impressed, rejecting out of hand ‘the basic premise of the Court’s argument – that American law should conform to the laws of the rest of the world’ (page 18). In Scalia’s view ‘disapproval by “other nations and peoples” should [not] weaken [the Court’s] commitment [to American principles]’ (page 22). This is vintage ‘nationalist’ Scalia, vehemently opposing a role for international and foreign law in a self-contained US legal order that has no lessons to learn from the wider world.

In Hartford Fire, in contrast, Scalia turned out to be a fierce adherent to principles of international law. In this case, an antitrust conspiracy case, the majority held that the principle of international comity did not bar it from holding London-based insurers, alongside domestic insurers and associations, liable under US antitrust law. Scalia, however, opined that, even where the US Congress had made laws applicable to persons or activities beyond US territorial boundaries (for which it surely had the power in this view), ‘statutes should not be interpreted to regulate foreign persons or conduct if that regulation would conflict with principles of international law’ (p. 815). For Scalia, comity and reasonableness should guide the jurisdictional inquiry; applying these factors to the case, he considered the assertion of jurisdiction over the London insurers as unreasonable (p. 819). In my own work on jurisdiction, for that matter, I have toed the Scalia line, and gone on to emphasize reasonableness as a useful device to limit jurisdictional excesses across the board.

These two opinions may appear contradictory. In Roper, Scalia dismissed the majority’s attention to international law, whereas in Hartford Fire, he dismissed the majority’s failure to attend to international law. This incongruity is more apparent than real, however. One should recall in this respect that the system of international law is not a monolith. It consists of a multitude of rules serving very different purposes, which may at times be in internal tension. Practitioners and scholars may well support some purposes and not others. On account of his opinions, Scalia can be considered to adhere to a classic, ‘billiard-ball’ purpose of international law characterized by international order, non-intervention, sovereign equality and co-existence, while repudiating a more progressive ‘human dignity’-based purpose that is buttressed by human rights and enmeshes international and domestic law (in contrast, some of his colleagues, notably Justice Breyer, who wrote the Roper opinion, would subscribe to the latter progressive view). While admittedly, to my knowledge, Scalia never explicitly laid out his overall philosophy on international law, I consider it as hardly incongruous for Scalia to support the international rules of jurisdiction in Hartford Fire (which are closely connected to the principle of territorial sovereignty and non-intervention), while rejecting the domestic effect of international human rights norms, let alone foreign interpretations of such norms, in Roper.

Such a philosophy of international law is hardly unique. On the court itself, even liberal judges such as Souter and Stevens embraced a more restrictive view on interpretation. Restrictive approaches to the role of international law in the domestic legal order are also shared by quite a number of international legal scholars in the United States (see Goldsmith and Posner, The Limits of International Law (2005) and Posner, The twilight of Human Rights Law (2014)), as well as by emerging nations defending their hard-fought independence sovereignty from international law intrusion. I would not necessarily consider this a retrograde position. Rather, it speaks to an understandable unease with international legal prescriptions that have come into being through opaque and arguably undemocratic processes. Widespread dissatisfaction with an identity-threatening European Union – as epitomized by the upcoming UK referendum on EU membership – may fit this mould too (although such dissatisfaction may also be traced to rising inequality resulting from globalization processes). Witnessing current developments, a strengthening of the classic, state sovereignty-based Westphalian view, dear to Justice Scalia, may well be under way globally.