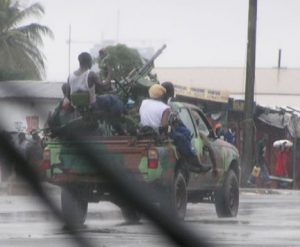 On 21 April 2017, the Court of Appeal of ‘s-Hertogenbosch convicted Dutch businessman Guus Kouwenhoven to 19 years of imprisonment for, inter alia, complicity in war crimes committed in Liberia. In the late 1990s Kouwenhoven had provided arms to the murderous regime of the Liberian president Charles Taylor, who was later convicted to 50 years of imprisonment by the Special Court of Sierra Leone. This is a rare example of a domestic court holding a corporate actor liable for involvement in the commission of international crimes abroad. In line with the recent Corporate Crimes Principles of the International Corporate Accountability Roundtable, a corporate actor is defined as a ‘corporate entity or individual acting on behalf of a corporate entity’.. It bears emphasis that Kouwenhoven, while directing a corporate entity, was convicted in his individual capacity. In the Netherlands Kouwenhoven is not a unique case; earlier, another businessman, Frans van Anraat, who had sold raw materials for the production of chemical weapons to Saddam Hussein, was also convicted of complicity in war crimes (upheld on appeal). The Kouwenhoven case highlights again the potential of complicity to hold criminally to account Western corporate actors who ‘recklessly’ accept the risk that their business dealings with  warlords could contribute to the commission of international crimes. The next challenge will be how to prosecute corporate entities rather than individual businessmen for their involvement in international crimes.

Kouwenhoven was a Dutch businessman close to Charles Taylor during the vicious civil war in Liberia. He had been granted timber concessions in Liberia, and in return he provided Taylor’s army with arms. These arms were subsequently used to commit war crimes. The Hague Court of Appeal acquitted Kouwenhoven of war crimes, holding that the evidence offered by the prosecution could not sustain a conviction. The Supreme Court, however, ordered a retrial on the ground that the Court of Appeal had insufficiently motivated why it had not allowed the testimony of two witnesses. The ‘s-Hertogenbosch Court of Appeal, to which the case was referred, then went on to convict him for violations of the Dutch Sanctions Act as well as for complicity in a large number of war crimes.

The Court of Appeal based its jurisdiction over the charge in complicity in war crimes on the now defunct Dutch Criminal Law in Wartime Act (War Crimes Act), which criminalized certain breaches of international humanitarian law. The War Crimes Act provided for universal jurisdiction over violations of Common Article 3 of the Geneva Conventions, although Kouwenhoven was in fact prosecuted on the basis of the active personality principle. Of note is that, by the time the prosecution was brought, the War Crimes Act has already been replaced by the International Crimes Act (2003), which also provides for universal jurisdiction over war crimes. The prosecutor wanted to remain on the safe side, and, in view of the legality principle, charge the suspect under the legal regime that applied at the time of his acts in the early 2000s. Also of interest is that the Court rejected the suspect’s reliance on an amnesty deal in Liberia. According to the Court, the amnesty deal had been set aside by a later peace agreement and the work of the Truth and Reconciliation Commission of Liberia. More fundamentally, the Court took the view that no amnesty could be given for international crimes. The question could also be raised whether an amnesty given in Liberia would be valid before a Dutch court.

As regards the complicity charge in this kind of cases, it is known that various standards of mens rea (the mental element of the crime) circulate internationally. Is purpose is required? Does knowledge, even if just constructive, suffice? Whether a common law or international law standard of aiding and abetting would apply turned out to be a major bone of contention in US Alien Tort Statute civil litigation. In cases before domestic criminal courts, however, it is likely, as James Stewart has pointed out, that domestic courts will normally decide cases on the basis of homegrown complicity standards, perhaps complemented but not contradicted by international criminal law standards. This also happened in Kouwenhoven, where the Court indeed applied the Dutch mens rea standard of dolus eventualis, just like the Court of Appeal had done in the Van Anraat case. Pursuant to dolus eventualis, an accused is culpable where he foresees the possibility of an unlawful circumstance or consequence occurring, and nonetheless proceeds with his conduct (for those interested in the technicalities of dolus eventualis as it is applied in an English-speaking jurisdiction: see the seminal South African case of R v Jolly 1923 (AD) 176). According to the Court of Appeal in Kouwenhoven, by importing weapons and performing other material acts, and given the knowledge that he had of the violent character of Taylor’s combatants, the suspect had consciously accepted and made peace with the risk that war crimes could be committed. In passing, the Court noted that this standard of dolus eventualis is also used in international criminal law, without providing a reference. This is largely true: the Yugoslavia Tribunal has used the related standard of ‘recklessness’ to sustain convictions for complicity or aiding and abetting. See, for instance, the Furundzija judgment (para 246): ‘[If the accused] is aware that one of a number of crimes will probably be committed, and one of those crimes is in fact committed, he has intended to facilitate the commission of that crime, and is guilty as an aider and an abettor.’

Van Anraat and Kouwenhoven demonstrate that international criminal cases against corporate actors can be brought successfully, provided that prosecutors are able and willing to invest in building a case, to overcome procedural adversities, and to hear a sufficient number of reliable witnesses, and provided that they are supported by civil society or media actors.

It bears emphasis that the cases were brought against individual businessmen, not against corporations. This is largely because the relevant corporations coincided with the persons of Van Anraat and Kouwenhoven. While in no way denying the difficulties the prosecutor faced in these cases, charging corporate entities with complicity in international crimes will prove even more daunting. In such cases, difficult questions will have to be answered as to how to attribute conduct to the corporation, using techniques of vicarious or organizational liability. The prosecution of Van Anraat and Kouwenhoven was also facilitated by the fact that, at the time of prosecution, Van Anraat and Kouwenhoven had no political support to speak of, neither in the host state (where the regime had changed) or the home state. Accordingly, there was little chance of political intervention derailing the proceedings. That might be different with regard to large corporations that have close links to home and host state governments. In fact, there is no single case available of a corporation going on trial for violations of international criminal law.