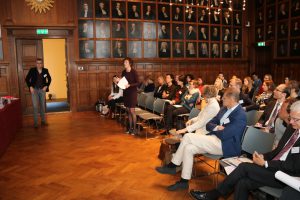 Recalling Ucall’s multidimensional perspective on accountability and liability questions, it was striking, although probably hardly surprising, that very few participants seriously believed that only one particular disciplinary approach would be the ‘silver bullet’ to bring multinationals to account. Instead, participants showed a remarkable openness to other disciplines and approaches, and realized that only a combination of accountability and regulatory tools can take us forward. If John Ruggie, the father of the UN Guiding Principles on Business and Human Rights (UNGPs), had been in Utrecht, he would have nodded approvingly, as – indeed – the UNGPs also contemplate the combination of multiple tools.

Participants clearly endorsed the UNGPs as the central framework for the business and human rights debate. There was less support for a comprehensive business and human rights treaty, largely because the UNGPs are becoming entrenched as the gold standard of corporate human rights compliance, which in turn is the consequence of businesses having been extensively consulted. It may be risky for a global treaty to displace the UNGPs as the rallying point for the business and human rights debate, as a treaty is likely to be less sensitive to operational detail and may lack support from states and businesses. It may even bring the practical progress brought about by the UNGPs, including the National Action Plans that are being drafted by a growing number of states and corporate compliance programmes, to a standstill. If a treaty were to be negotiated, drafters should bear foremost in mind the potential for effective implementation of treaty provisions, and their actual impact on the ground, i.e., on actual business practices and the lives of affected communities.

There was a strong sentiment that, regardless of whether a treaty would be adopted, we should make the most of the existing legal accountability and liability mechanisms, or at least redirect these to confront the new challenges posed by multinational business activity. For instance, existing criminal laws are an untapped reservoir to hold corporations criminally liable, both under international and national criminal law. Admittedly, the jury is still out as to whether a retributivist approach is always suitable for tackling corporate wrongdoing (will it necessarily lead to increased future compliance?). However, in case of corporate involvement in core international crimes, the moral condemnation associated with a criminal conviction does appear appropriate. It sends a strong signal that society cannot tolerate certain behavior.

In other situations, requiring increased transparency, reporting and due diligence may do the trick. There is an unmistakeable tendency in this regard. The UK Modern Slavery Act of 2015 requires corporations (at least the bigger ones) to report on the steps they have taken to ensure that slavery and human trafficking are not taking place in any of its supply chains. The recently adopted Dutch Child Labor Due Diligence Act requires the same for child labor. The legislative initiative that has probably made the most headlines is the French law establishing a duty of vigilance for parent and subcontracting companies that was adopted in March 2017. This law requires that larger French corporations publish vigilance plans that identify risks and prevent grave violations of human rights and environmental standards throughout the supply chain. Also to be cited is the EU Conflict Minerals Regulation, soon to be adopted, which imposes a mandatory supply chain due diligence obligation on EU importers of various metals from conflict-affected and high-risk areas.

Regulation has however not just come from states and international organizations. Corporations and civil society actors are also increasingly taking matters into their own hands, for instance through the development of multi-stakeholder initiatives that address human rights and environmental abuses associated with international business practices. An example are the covenants that are currently being negotiated with various Dutch business sectors with a view to addressing the risks relating to international corporate social responsibility that are associated with their activities. Initiatives such as these are to be applauded, as they may have a systemic, preventative effect in ways that ex post facto legal liability regimes may not have. It should be noted in this respect that various paper presenters pointed out the risk that more mandatory reporting and due diligence instruments, rather driving real change in corporate policies and practices, will become mere ‘tick the box’ exercises.

Participants nevertheless agreed that, irrespective of (new) governmental or private regulation, it remains key that when corporate conduct causes harm to local third parties like employees or communities in host countries, such victims should always have a remedy. This means that they should be able to seek redress and hold corporations accountable – an imperative that is quite central to the UNGPs and more generally to a rule of law-based society. Access to remedy in the Business & Human Rights context is a work in progress however, with obstacles on the road. Transnational tort ligation is being pioneered, corporations are setting up their own grievance mechanisms, mediation and arbitration are envisaged. It is possibly too early to tell whether all these arrangements will ultimately be effective. What is clear is that these experiments in polycentric governance are worth having. Time will tell whether they are worth keeping.

The conference was no doubt a success, not in the least because it combined academic and practical perspectives, and because the audience participated so enthusiastically in the debate. For those interested in the results of the conference: a selection of the papers that were presented at the conference will soon be published. We will obviously keep you informed.

The conference committee of the Ucall Conference 2017: