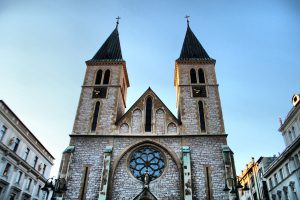 Dr Kool’s commentary on the Kim Holland affair is both interesting and thought-provoking. For an English academic lawyer, the case is particularly so for its technical detailed legal issues as well as its insights into the role of criminal law in society. What would we do in England, if two people enter a Church and use confessional for the purposes of making a pornographic video of oral sex? What can we learn by the comparison of what the English might do, with what the Dutch have done?

As a matter of technical legal rules, finding the right offence for this conduct is part of a larger question of what sexual conduct society is willing to have in the open. It was not that long ago that England and Wales had prosecutions for two men or two women kissing in public, and public nudity remains a grey area, dependent on the purpose and the response from those who see it. The Kim Holland case is more complex because it took place in a Church, recorded for later dissemination to those outside the Church. Is the wrong one against (1) religion, (2) societal norms of behaviour or (3) against any relevant private property rights in respect of the Church? It could be against more than one, but not all might be protected directly.

For wrongs in respect of religion, even in legal systems where blasphemy is no longer an offence, there might be offences against public order which include religious elements. English law removed the common law offence of Blasphemy in 2008 (Criminal Justice and Immigration Act 2008, s. 79), but in some circumstances using such language in the public sphere could be an offence against the Public Order Act 1986, such as by s. 5 (causing harassment, alarm or distress) or s. 4A (Intentional harassment, alarm or distress).

If a wrong against societal norms of behaviour, there are difficult questions over the scope of such offences. A recent example of a similarly difficult situation is in “upskirting”, where a defendant (D) takes photos covertly from an angle that looks up a skirt or dress. Finding the right offence for this is difficult. English law has an offence of outraging public decency, which might cover this, if done in public. (The offence of Voyeurism under ss. 67-68 of the Sexual Offences Act 2003 only applies to private acts and it is not clear that would be what is engaged in by wearing clothes in public). There are some who call for a new offence to be created, as indeed exists in Scotland (Sexual Offences (Scotland) Act 2009, s. 9).

If an offence against private property, what are the limits of those rights. There is no general criminal offence of trespass in England, though you still see signs saying “trespassers will be prosecuted”, they simply suggest a misunderstanding of the law and/or an intent to scare those who do not know it. There are specific protected places, whether generally (like airports) or specifically designated so for a period of time. There is an interesting analogy, in that for the purpose of Burglary (contrary to s. 9 of the Theft Act 1968, D is liable, inter alia, if he “enters any building or part of a building as a trespasser and with intent to commit [a relevant offence]”, the relevant offences being theft, causing serious bodily harm or unlawful damage to property (rape used to be included but there are now specific inchoate offences in the Sexual Offences Act 2003). Even if a person had permission to enter the Church in general, s/he might not have had to enter the confessional, much like permission to enter a supermarket does not extend to the staff room, offices or storage area. Of course, there is also an argument that if you enter any place the public normally have permission to be but do so intending to do to acts you know are forbidden, you might not have permission to be there at all. There are also offences relating to specific places, with some offences in respect of church yards and similar. Part of the fun of a common law system is having statutory offences going back centuries, often on niche areas. There is, in fact, in England an offence from the Ecclesiastical Courts Jurisdiction Act 1860 of “making a disturbance in churches, chapels, churchyards etc” which would probably cover the relevant conduct here, punishable by a fine or imprisonment up to two months. The relevant offence is:

“Any person who shall be guilty of riotous, violent, or indecent behaviour in … any cathedral church, parish or district church or chapel of the Church of England and Ireland, or in any chapel of any religious denomination, or … in any place of religious worship duly certified under the provisions of the Places of Worship Registration Act 1855, whether during the celebration of divine service or at any other time, or in any churchyard or burial ground.”

This offence very clearly links the property, public order and religious aspects of the conduct prohibited.

The more general interest in the case is in what the use of the criminal law means to the citizens within its scope. The local Church made a request to a state agent to consider a criminal prosecution. There is almost certainly a civil claim, though the precise loss might be hard to quantify in order to quantify the most appropriate remedy, an award of monetary compensation which is, in almost all cases in England at least, only compensatory and not punitive. Nonetheless, a criminal action was preferred. Not just any criminal action, an action by the state. In particular, the Church could say it simply reported the events, it was the state which decided to prosecute. The punitive functions of the criminal law would then not be as directly associated with the activities of the Church. Of course, in England a private prosecution would theoretically be available, but it would essentially have to meet the same standards as the Crown Prosecution Service’s decision to prosecute, and would not give the Church any state veneer to hide behind. There’s also a question of the image of the church in the order in which it has sought to do things: having gone to the criminal prosecutor first, does it seem less acceptable then to appear to hound the defendants, but bringing a civil claim?