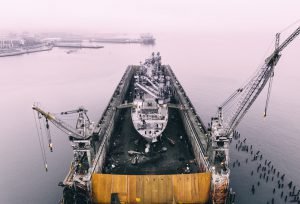 I was recently invited as a legal expert to reflect on the potential for accountability of Dutch corporations profiting from the labour exploitation of North Korean workers abroad. Already in 2016, a team led by Remco Breuker, professor of Korean Studies at Leiden University, had issued a report detailing the appalling (forced) labour conditions in which North Koreans work in Europe. This happens in particular in Poland where they are forced to work on shipyards and have to hand most of their wages to the North Korean government. Apparently, North Korea ‘trafficks’ these workers to Poland for self-enrichment purposes. In the wake of this report, investigative work sponsored by the Why? Foundation exposed how various corporations and governments are complicit in these abuses (this work resulted in a documentary, Dollar Heroes, more information can be found here). On that basis, Breuker’s research team produced a follow-up report, released on 6 February 2018, which highlighted the involvement of Dutch corporations, notably as buyers of ships made by North Koreans in Poland. In this post, I explain on what grounds these corporations could be held to account under Dutch criminal law, and in particular how Dutch jurisdiction could be established over them. END_OF_DOCUMENT_TOKEN_TO_BE_REPLACED