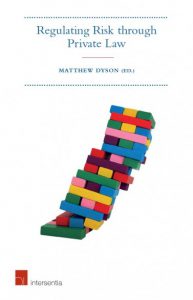 On the 20th of February, the volume Risk Regulation through Private Law, edited by Ucall-research fellow Matt Dyson, was launched at Oxford University. The volume explores, for nine legal systems, an overarching legal conception of risk, particularly of the linked role of a) risk-taking in generating liability and b) in liability regulating risk. It consists of two parts. Part I of the volume (Risk Overviews) deals with risk-based reasoning within those nine tort law systems and examines how risk influences the nature and content of tort law. Part II (State of the National Art on Risk) focuses on specific developments within the legal systems. Ivo Giesen, Elbert de Jong and Marlou Overheul wrote the Dutch chapter for part I. De Jong also wrote the Dutch chapter for part II, dealing with judicial risk regulation in e.g. the context of climate change, tobacco related risks, and air-quality standards (for more on that, see here and here). In this weblog we discuss the most important insights of the Dutch chapter in part I (see I. Giesen, E.R. de Jong & M. Overheul, ‘How Dutch Law Responds to Risks’, in: M. Dyson (ed.), Regulating Risk Through Private Law, Intersentia 2018, p. 165-193).

Our chapter tries to unravel how Dutch tort law ‘reacts’ to unknown and/or uncertain risks. Think of the way the law handles the risk of nanotechnology or of new toxic substances, to name two examples. For that analysis, important focal points in the case law include the line of cases decided by the Dutch Supreme Court concerning asbestos (e.g. on prescription, duty of care, and causation), the DES-case (on alternative causation), and the district court case dealing with the possible liability of the tobacco industry for the harms of smoking, as well as the courts handling litigation concerning workmen’s diseases (probably) due to e.g. lead paint poisoning. Below we shortly discuss three issues, relating to the duty of care, causation and the risk development defence. We conclude with some expected developments in Dutch tort law in relation to risk and uncertainty.

Duty of care & the precautionary principle

With regard to the duty of care for uncertain risk the precautionary principle soon comes into the equation. This principle, which primarily stems from international environmental law, requires that measures are taken if there is a reasonable ground of concern for damage occurring. Although the Supreme Court has not given an explicit ruling on its legal status, there are strong indications that the principle is relevant for examining the duty of care in tort as well. First of all, the principle is broadly accepted and applied in Dutch national physical safety policies and by civil society (e.g. NGOs and the unions). Thus, the principle is in society generally accepted as a guiding principle for dealing with uncertainty and risk. Secondly, the Supreme Court repeatedly ruled that, even when specific public regulations are lacking or inadequate, on the basis of unwritten law operators are under an obligation to take measures in order to prevent asbestos-related diseases (see also NJ 1990/573 & NJ 1993/686). In order to determine whether and which preventive measures have to be taken, a judge has to look into, inter alia, the level of certainty about the risks and the nature and severity of these risks. The phrase ‘level of certainty’ used here indicates that a minimum threshold of certainty about the existence of a risk is not needed. Lastly, situations of uncertain risk bear such a resemblance to the doctrine of hazardous negligence (‘gevaarzetting’) that the rules that have been developed under this doctrine principally also apply to situations of uncertain risks. This means that an actor has to show proper circumspection with respect to the interests of others and, more specifically, to protect others against an unreasonable possibility of harm, even if this possibility is scientifically still uncertain. To be sure, which level of (un)certainty is the bottom threshold for such a duty has as yet not been determined.

Dutch tort law contains several variations on the development risk defence, which is best known from the law of product liability. Generally spoken, an actor can escape liability if the risk was not known and/or unknowable given the state of scientific and technical knowledge at the time of the risk-taking behaviour. The defence has been invoked in relation to, e.g., blood transfusions of HIV-infected blood, breast implants and a dike breach. Although case law on the defence is scarce, due to modern-day technological developments and uncertainties about the risks of such developments (think of self-driving cars, nanotechnology and biotechnology), we expect that the defence will gain more relevance in the future. An important question that arises in this context is, yet again, what level of uncertainty, if any, must be attached to the scientific knowledge and insights about the existence of a risk in order for the risk to legally qualify as unknown and/or unknowable.

For establishing causation, an examination has to be made whether the existence of the harm would have occurred but for the existence of the behaviour of the defendant. Under this test, the plaintiff who in principal bears the burden of proof, will face problems in proving a causal connection between the alleged wrongdoing and the harm due to causal indeterminacy and the evidential problems stemming from it. An ‘instant classic’ technique to give some ease to the plaintiff is the use of the proportionate liability doctrine. In 2006 it was accepted by the Supreme Court in the asbestos case of Nefalit/Karamus. The doctrine has also been accepted in relation to other risks, such as financial risks, although there is discussion about its exact scope. In addition, the Supreme Court decided that, under certain conditions, a court is allowed to use the theory of the loss of a chance, leading to a percentage of the claim being awarded. Since the approval of this approach by the Supreme Court, it has been applied to cases of professional liability and medical negligence mostly, but also in a case of government liability, involving the massacre in Srebrenica. In literature, the theory of the loss of a chance is sometimes seen as another way to ‘implement’ proportional liability. Be that as it may, as the Supreme Court also made clear, if the possibility that the behaviour of the defendant contributed to the damage is too small or too uncertain/ambiguous, proportionate liability cannot be applied. One could thus conclude that precautionary reasoning only marginally influences the test for examining causation, and not in those (ambiguous) cases where that line of reasoning would be most needed by the claimants.

Some will cherish this reluctance, because even though these two causal doctrines are generally accepted, they also have been criticized. Former Advocate General Jaap Spier, for instance, argues that in developing the proportionate liability doctrine for asbestos-related risks in a victim-friendly way, the Supreme Court might not have been sufficiently aware of the potential economic and financial implications of this doctrine if it were to be applied to other, similar risks, such as climate change risks, financial risks and the risks of new technologies, such as nanotechnology and biotechnology (see part II for references). Applying that theory elsewhere might not be appropriate without further consideration, for instance because of undesirable macro-economic consequences of compensation for catastrophic risks, the risks of opening the floodgates of liability or of promoting undesirable defensive behaviour to avoid liability.

Developments: what will the future bring?

For the future, three developments will play a significant role, we think, in how Dutch tort law will evolve in relation to risks. Without exploring these further here, we would like to mention, first of all, that the Dutch law on collective actions is about to change, and on its way to create the possibility of actually claiming damages in a collective action, which is especially relevant in relation to widespread risks and harms, such as the negative effects of gas drilling. Secondly, the question as to how technological developments, as mentioned above, should be incorporated into the (existing) legal framework and whether that framework should be reformulated, are increasingly subjected to scholarly debate (e.g. NJB 2010, issue 10). Lastly, scholars more and more often call for the use of the tort law system to prevent the occurrence of harm, e.g. through injunctions (see also Keirse on this weblog). In relation to risks, the concept of judge-made risk regulation is particularly relevant here. In light of perceived and sometimes also real governmental failures in relation to risks, the complementary role of civil courts as risks regulators is in the spotlights. Currently, this concept is starting to enter the courts, raising questions about the legitimacy and adequacy of civil courts as risk regulators. But that’s another topic altogether, something for another blog at another time…