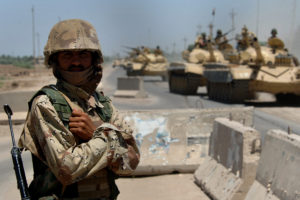 Five years ago, I wrote a Ucall blogpost on the judgment of the European Court of Human Rights (ECtHR) in Jaloud v the Netherlands (2014), which concerned the 2004 death of Mr Jaloud in southern Iraq. Mr Jaloud died from gunfire at a vehicle checkpoint which was at the time under the authority and control of Dutch troops participating in the Stabilization Force in Iraq (SFIR). It is recalled that the ECtHR held that the Dutch investigation into the circumstances surrounding Jaloud’s death failed to meet the standards required by Article 2 of the European Convention on Human Rights (ECHR), and thus that the Netherlands had breached its procedural obligations regarding the right to life. The ECtHR’s judgment paved the way for further litigation regarding Jaloud’s violent death. Subsequent to the judgment, Jaloud’s father filed a civil suit against the Dutch State in the District Court of The Hague (hereafter ‘Hague District Court’), which rendered an interlocutory judgment on 20 November 2019.  END_OF_DOCUMENT_TOKEN_TO_BE_REPLACED