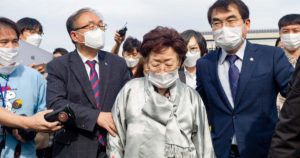 n 8 January 2021, the Seoul Central District Court of South Korea rejected Japan’s State immunity plea in a case brought by twelve ‘comfort women’ who were forcibly subjected to systemic sexual enslavement by the Japanese military before and during World War II (an English translation of the judgment is available here). The court held Japan liable for these practices and entitled each of the women to 100 million KRW (approximately 77,000 EUR). In this post, we note that this decision is in tension with the judgment of the International Court of Justice (ICJ) in the Jurisdictional Immunities Case (Germany v Italy; Greece intervening, 2012). In this judgment, the ICJ held that a foreign State, even if accused of committing international crimes, remains entitled to immunity from jurisdiction under customary international law. However, we also argue that international law in this field may be in flux, in the sense that an exception to State immunity regarding international crimes may be emerging. Furthermore, even if such an exception has not emerged just yet, domestic courts may refuse to give effect to relevant international immunity norms to the extent that they clash with constitutionally protected fundamental rights, such as the right of access to a court.

Japan boycotted the South Korean court proceedings, arguing outside the courtroom (via cabinet officials) that the alleged illegal acts constitute sovereign acts, and accordingly that the principle of jurisdictional immunity applies. In its decision, however, the court pointed out that these acts amount to crimes against humanity, which qualify as violations of jus cogens norms (peremptory norms of international law), and concluded that ‘it is reasonable’ for the court to assume its jurisdiction over Japan ‘in this exceptional case’, regardless of the sovereign nature of the alleged acts (p. 26). The court added that exempting Japan from jurisdiction of the court, which was chosen by the victims ‘as a forum of last’ resort, on grounds of State immunity, would lead to unreasonable and unjust results (p. 28-29). According to the court, upholding Japan’s immunity would prevent that State from being held legally liable for crimes against humanity. In addition, it would deprive the victims of their right of access to a court and to an effective remedy as guaranteed by the South Korean Constitution and the Universal Declaration of Human Rights (p. 26). The court paid particular attention to the vulnerable position of the plaintiffs, ‘merely individuals’, with no negotiation or political power, for whom this lawsuit was the last measure left to pursue reparations.  It also emphatically recalled that States should not abuse the principle of jurisdictional immunity to evade responsibility for jus cogens violations (p. 29).

The tension with the ICJ’s judgement in Jurisdictional Immunities

This judgment bears a striking resemblance with earlier judgments rendered by Italian and Greek courts, which had rejected the immunity of Germany in relation to civil claims alleging violations of international humanitarian law committed by the Third Reich in Italy and Greece during World War II. However, subsequent to these judgments, the ICJ held in the Jurisdictional Immunities Case that, ‘under customary international law… a State [is] not deprived of immunity by reason of the fact that it [is] accused of serious violations of international human rights law or the international law of armed conflict’ (para. 91). The qualification of such violations as breaches of jus cogens norms was held to be immaterial for purposes of (lifting) State immunity, as the rules of State immunity ‘did not bear upon the question whether or not the conduct in respect of which the proceedings were brought was lawful or unlawful’ (para. 93).

The ICJ’s judgment in Jurisdictional Immunities affirms the principle that foreign State immunity persists even in the face of allegations of international crimes or jus cogens violations. The South Korean decision, which precisely rejects State immunity in these circumstances, is clearly in tension with Jurisdictional Immunities, and seems to violate international law. Japan could hold South Korea internationally responsible for this violation. Unlike Germany, however, it cannot bring the case before the ICJ as South Korea has not accepted the compulsory jurisdiction of the ICJ.

An alternative reading of the South Korean decision is that it may trigger developments in customary international law and yield a new customary norm by virtue of which State immunity does not extend to international crimes. This is not necessarily far-fetched, as the Federal Court of Justice of Germany ruled in January 2021 that, in criminal proceedings, organs of a foreign State are not entitled to functional immunity (immunity ratione materiae) under customary international law (see here for Claus Kress’s analysis of the judgment, of which the text itself is not yet available). In doing so it followed the International Law Commission (ILC), which in 2017 laid down the rule that functional immunity of State organs does not extend to international crimes (Draft Article 7 of the Draft Articles on Immunity of State Officials from Foreign Criminal Jurisdiction).

It is crucial to realize that this functional immunity derives from State immunity proper. This means that when a State enjoys immunity, a State official, acting in an official capacity will also enjoy immunity, and vice versa. This parallelism was recognized by the European Court of Human Rights in Jones v United Kingdom (2014): ‘Since an act cannot be carried out by a State itself but only by individuals acting on the State’s behalf, where immunity can be invoked by the State then the starting point must be that immunity ratione materiae applies to the acts of State officials. If it were otherwise, State immunity could always be circumvented by suing named officials’ (para. 202).

Accordingly, the crystallization of new customary norms abrogating functional immunity regarding international crimes also impacts on the immunity of the State proper. It is unclear whether such abrogation represents positive law (see for criticism of the ILC’s approach here). As one of us has submitted elsewhere, however, in the context of litigation in the Netherlands, there is arguably a grey area in which domestic courts are free to grant or reject State (official) immunity in respect of international crimes.

Even if abrogating State immunity in respect of international crimes violates international immunity norms, that does not mean that domestic courts are obliged to apply them. This will ultimately depend on the extent to which domestic constitutional norms allow for the effect of international law in the domestic legal order. It is recalled in this respect that in 2014 the Italian Constitutional Court declared the ICJ’s judgment in Jurisdictional Immunities non-transposable in the Italian legal order. The Court refused to apply the customary international norm identified by the ICJ, on the grounds that the fundamental principles of the Italian constitutional order and of inalienable human rights, in particular the right of access to a court, constitute ‘a limit to the reception of international rules generally recognized to which the Italian legal order conforms under Article 10(1) of the Constitution’ (see for a summary in English here). The South Korean court reasoned similarly, where it held that immunity norms cannot deprive the victims of their right of access to a court and to an effective remedy under the South Korean Constitution.

This line of reasoning, which appears to place national (constitutional) law above international law, is not necessarily international law-unfriendly. In fact, as constitutionally protected fundamental rights often qualify as internationally protected human rights, domestic courts, when rejecting State immunity on fundamental rights grounds, may in fact further the international rule of law, which in a thick version of the concept also consists of international human rights norms (see also the work of Antonios Tzanakopoulos on ‘consubstantial norms’, and of André Nollkaemper on the domestic courts’ contribution to the maintenance of the rule of international law). As it happened, the South Korean court did not just refer to the right of access to a court under South Korean law, but also to the same (arguably customary) right under the Universal Declaration of Human Rights, thereby considering the relevant domestic and international norms to have the same content.

This blog was co-written by Hye-Min Kim. Hye-Min Kim is a Phd candidate at Utrecht University, department of International and European Law, on the concept of solidary obligations on States with shared or collective responsibility to make reparations for human rights violations, as a possible victim-oriented principle on reparation.