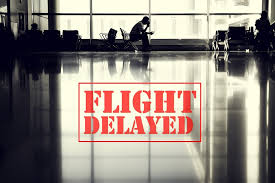 Your flight is delayed. You arrive at your destination more than three hours late. You’ve heard of Regulation 261/2004 (hereafter: Reg261) that entitles you to € 400 compensation for that delay. Perhaps you call the airline and ask for compensation. You are told to fill out a web form on the airline’s website. After weeks of silence, you call again. The customer service asks you to fill out the same web form once more. You send a rather annoyed e-mail about the delay, your complaint, and your feelings about customer care services in general. You receive an e-mail in which you are thanked for choosing the airline’s service, followed by an expression of regret for the delay of the flight in question, and a notification that – unfortunately – you are not eligible for compensation because the delay was caused by an extraordinary circumstance which exonerates the airline from paying compensation.

So, what do you do then?

Reg261’s primary goals are to raise the standards service of airlines and to empower air passengers. In the early nineteen nineties, sub-standard performance was considered an unwanted side-effect of the liberalisation of the aviation market. Reg261 killed two birds with one stone: it introduced consumer rights into the relation between airlines and passengers (right to care, assistance and compensation in case of denied boarding, cancellation and long delays) and it empowered those passengers to collect their claims directly from ill-performing airlines in court at Member States. The financial repercussions would incite the airlines to raise their standards.

The reality is, however, that only a small percentage of passengers succeed in enforcing their rights. Although the amount payable – € 250, € 400 or € depending on the length of the flight – is quite high considering that it can easily exceed ticket price, many passengers find themselves at a loss when their first effort to obtain compensation from the airline fails. This is because the answer to the question ‘So, what do you do then?’ would probably be to take the case to court. For the garden-variety air passenger this is a step too far. Starting legal proceedings brings costs (court fee for a small claim is € 79 in the Netherlands, bailiff fee is € 98,01), a lot of effort and time, or alternatively expensive legal expertise. Although legal representation is not mandatory for small claims (claims under € 25.000) in the Netherlands, many passengers would probably find serving a summon to be a daunting process in itself. More importantly (and unfortunately) there are procedural risks as well. There are many unclear provisions in Reg261 – too many to list here – but the absolute number-one litigation generating provision is Article 5 paragraph 3, which exempts the airline from paying compensation if it can prove that the cancellation or delay is caused by ‘extraordinary circumstances which could not have been avoided even if all reasonable measures had been taken’. Although thirteen years of litigation have crystallized the concept somewhat, there always seems to be a situation that leaves room for doubt. If the claim is not awarded, the passenger not only bears his own legal costs, but also those of the defendant. In small claims cases like these, the costs of proceedings in the Netherlands can range from € 120 to € 700. For many passengers these costs outweigh the benefits.

This is where claim agencies step in. There are numerous legal service providers whose revenue model depends on the lack of time, stamina and/or legal knowledge of passengers to obtain compensation from airlines. Often, these claim agencies work on a no cure, no pay basis. The success fee ranges from 24% to 30% of the collected compensation. Claimingo, the claim agency in the case that prompted the author to write this blog, has a special kind of service: Claim&Go. Claimingo buys the compensation claims from the passengers, who receive the sales price within two to five working days, risk free. The claim agency bears the economic and legal risk, which, naturally, is factored into the sale price (See section (iii) of the General condition of Claimingo, which can be found at their website).

In the case at hand, four passengers on a Ryanair flight from Eindhoven to Marrakech who arrived at their destination with a delay of more than three hours, sold their claims to Claimingo. There was a delay of more than three hours. Claimingo started legal proceedings before the Court of Oost Brabant (Court of Oost Brabant of 28 June 2018, ECLI:NL:RBOBR:2018:3169), claiming the aggregate amount of € 1.600 for four passengers (€ 400 per passenger). Claimingo sued Ryanair in its own name as assignee of the four claims.

Ryanair’s primary defence (before invoking the extraordinary circumstances defence, which I will discuss later) was that Claimingo’s case was inadmissible because it had no cause of action. The reason for this was clause 15.4.2. of the Dutch General conditions of carriage:

All claims against Ryanair arising out of, or in connection to the contract of carriage, can nor may be assigned or pledged to third parties, nor are these claims susceptible to assignment or pledging*

Under Dutch law, parties to a contract can make claims arising out of that contract untransferable (art. 3:83 par 2 DCC). There are two flavours: untransferable with merely contractual consequences and untransferable with property rights consequences. Contractual consequences means that a person who transfers a claim despite the clause can be held contractually liable for damage arising out of it. Property rights consequences means that the transfer is simply not possible. A rule of thumb is that such clauses merely have contractual consequences, unless the wording of the clause clearly and objectively shows that the parties to the contract intended the clause to have property rights effects, as follows from the landmark decision form the Dutch Supreme Court in Coface v Intergamma.
The Court of Oost Brabant concluded that clause 15.4.2. intends to make claims arising out of the contract of carriage transferable in the property right sense. This means that the transfer of the compensation claims from the passengers to Claimingo was null and void, and thus Claimingo possessed no claims and thus had no right of suit. If one looks at the Coface v Intergamma-criterion, this seems like a logical conclusion. Words that suggest that clause 15.4.2. of the Conditions of carriage have property rights effects are ‘can nor may be assigned’, and ‘nor are these claims susceptible to assignment’. But the point is that the Coface v Intergamma-criterion was formulated in a business to business context. Was the court right to apply it so unreservedly in a consumer law context? Can we really expect the average passenger to recognize and fully comprehend what the difference is between contractual and property rights consequences of a non-transferability clause?

Claimingo did not argue that the clause was misinterpreted, but merely that it was unfair, in a Directive 93/13 on unfair terms in consumer contracts kind of way. The court however, denied Claimingo’s appeal to the Consumer Directive because it was not a consumer. Moreover, the court reasoned, passengers were not impaired by the clause: they still had the possibility to claim compensation under the Reg261. If necessary they could let themselves be represented by a legal professional.

Is it that easy under Dutch law to simply thwart any future transfer of claims arising out of the contract of carriage? I hope not.

Firstly because buying claims and claiming in bulk by legal professionals may very well be the solution to the enforcement issues described above. Claimingo’s modus operandi seems pretty efficient to me. There is only one judgement and one collection, instead of four (or ten, or twenty, or all the passengers on a particular delayed flight). The passengers no longer have to outwait the lengthy court proceedings before they receive their compensation; they sell their claim, receive the sale price and they are done.

In cases where the outcome may be unsure (the extraordinary circumstances defence allows plenty of variables in that category) the procedural risks can be too much to bear for the average passenger to sue, but not for the claim agencies who can make a more educated decision and calculated decision because they can factor the risks involved into their business models. This may, in the end, lead to a faster crystallisation of the unclear aspects of Reg261, which ultimately should benefit all parties concerned (except for, perhaps, the claim agencies that are no longer needed if the law is crystal clear).

There is a second reason why I regret the outcome of this case. Alternatively, Ryanair invoked the extraordinary circumstances defence. According to Ryanair the delay was caused by an air traffic control decision not to allow the aircraft to land at Marrakech airport because of various “VIP”-flight movements in connection to the UN-Climate Convention, forcing the Ryanair aircraft to divert to Fez. I really would like to have known the Court of Oost Brabant’s take on this, – rather O’Leary-ish– defence.

* Note from the author: The clause was translated from Dutch to English by the author. The Dutch conditions of carriage can be found on the Dutch website of Ryanair. On a number of points (such as the transferability of claims) these conditions deviate from the English version