Each year, in the week after Ea 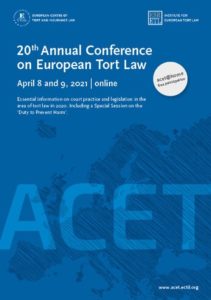 ster, the most significant developments of the past year in the field of tort law in Europe are discussed at the Annual Conference on European Tort Law, organized by the European Centre of Tort and Insurance Law (ECTIL) and the Institute for European Tort Law (ETL). Experts from across Europe present the highlights of their contributions to the Yearbooks European Tort Law, which are published yearly. UCALL members Emanuel van Dongen and Anne Keirse represent the Netherlands. At the 20th Annual Conference on European Tort Law that took place online on 8-9 April 2021, Emanuel van Dongen spoke about an important case of 2020 from our country: the question of responsibility of the Dutch State to repatriate women and children who left to the Islamic State in Syria. This blog shortly summarizes this contribution.

Public interest litigation and judge-made risk regulation via tort law is still gaining ground in the Netherlands and other countries. Various questions regarding politics and risks are laid before civil judges. Well known is that citizens all over the world sue their government over inaction on climate change. And in the Netherlands, they won. In the Urgenda case, the Dutch civil courts ordered the Dutch State to achieve a level of reduction of greenhouse gas emissions that is more ambitious than envisioned by the State in its own policy. This was reported by us at the previous conferences on European tort law.

This is a hot topic of debate in the Netherlands. Recently we have seen various examples of cases brought against the Dutch State. For example proceedings related to the way the government deals with the Covid-19 pandemic, procedures against the compulsory curfew etc.In the case at hand, the Dutch State was called upon to actively help repatriate the young children of women who joined Islamic State in Syria. Since the fall of the Islamic State, these women and their children have been held in refugee camps in Northern Syria in appalling conditions. The Dutch government insisted it was too dangerous for Dutch officials to go into the refugee camps and find the children to return them to the Netherlands. The mothers disagreed and filed a lawsuit. The women, also representing their minor children, asked the court to order the Dutch State to return both women and children to the Netherlands as soon as possible.

The court of first instance initially ruled that the Dutch government has no jurisdiction in the refugee camps – therefore the Dutch State cannot be held liable for violations of the rights of the children and women insofar as they take place in these refugee camps. However, there is a serious and acute emergency situation in which the children find themselves. As a result of that, various rights of the children, protected by human rights treaties, are being, or are in danger of being, violated. Therefore, the State has a general duty of care to be concerned about the harrowing fate of the children, and to offer them protection. The Court ordered the Dutch State to make every effort to bring the children and, where appropriate, their mothers back to the Netherlands.

Within eleven days, however, the woman and children’s hopes of returning to the Netherlands must have disappeared, because the Court of Appeal came to the opposite conclusion. It agreed that the State has no jurisdiction over these women and children, and thus no direct appeal could be made on human right treaties. The question whether the Dutch State has acted unlawful has to be based on the Dutch general tort provision (art. 6:162 DCC). For that, the Court of Appeal weighed the interests of the women and children on one hand and the State’s interests on the other. On the one hand, it considered the interests of the women and children who seek to protect the human rights invoked in this case – like the right to life and the right to liberty and security. Although the Dutch State has no jurisdiction to enforce these human rights on site, they can nevertheless play an indirect role in the balancing of interests for the application of the duty of care pursuant to art 6:162 DCC. On the other hand, it noted that the State has a clear national security interest. As submitted by the State, if the women and children would return to the Netherlands, they could pose a danger to the Netherlands or other Schengen countries. Moreover, safety risks are at stake for Dutch officials if they have to enter and help these women and children in North-Syria, and Dutch international relations may be jeopardised by the measures necessary for the repatriation. To balance these interests, the State has in this matter a wide discretionary power. The Court of Appeal concluded that the State could reasonably refuse to make an active effort to repatriate the women and children from the refugee camps.

In cassation, the Dutch Supreme Court also ruled in favour of the State. It affirmed that the human rights treaties were not directly applicable, because there was no jurisdiction of the Netherlands. The court sticked to the main rule that the jurisdiction of a State only extends as far as its territory (i.e. the idea of sovereignty). As to the question whether the Dutch State acted unlawful, the court ruled that the State nevertheless has a special human rights responsibility towards Dutch nationals, even where jurisdiction is lacking. However, in the end it came to the same conclusion as the Court of Appeal: the Dutch State had not acted unlawfully towards the women and children. Still, important is the clarification of the Supreme Court that although human rights treaties do not apply directly, they can nevertheless play an indirect role in the balancing of interests in the context of the application of the duty of care. Another important observation is that the case of these women and children is closely related to questions of (national) security and foreign policy. The policy of the State in these areas to a great extent depends on political and policy considerations and on the particular circumstances of the case. This means, according to the Dutch Supreme Court, that it is not for the court to make decisions in these matters. Moreover, courts must be cautious and can only verify whether the State weighed all interests involved and whether the State has made its policy in a reasonable manner. The fact that in this case, the security interests of the State outweighed the interests of the women and children may be justified, given the restrictedness of judicial review of decisions of the executive branch when it comes to national security and foreign policy. The message is clear: the Dutch State should not turn its back to these women and children, but as this matter is connected to several issues of safety and security, it is up to the government to decide, not to the court. In this way the constitutional principle of separation of powers is respected.

We started this blog with the topic of public interest litigation and judicial activism. It has been argued that public interest litigation and judicial activism may well be seen as an expression of democratic legitimation, as long as the State and the courts sufficiently respect the policy freedom of the State and objectify and justify their normative actions. Also, in the current case on the women and children in Syria, this policy freedom is respected. The detractors of judicial activism can be satisfied this time: the government is in charge, and the balance of powers is respected. But this idea is not new, as, from a historical perspective, safety and security are primary and oldest tasks of the government. Nor is the division of powers new, as well known, but clearly still alive and in the center of our attention.