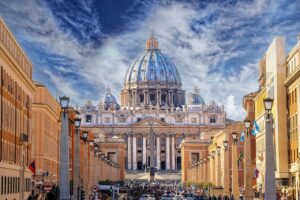 In multiple countries, allegations of sexual abuse in the Catholic Church have led to lawsuits against dioceses and clergy, and the establishment of investigation and claims commissions. However, because of the relatively muted response of the Holy See to the scandals, in some countries, victims have also filed tort suits in domestic courts against the Holy See directly. This has, for instance, happened in the United States, but also in Belgium. In 2011, a group of victims filed suit in the District Court of Ghent against, among other defendants, the Holy See. The victims asked the court to hold the Holy See liable in tort for its failure to take action against the abuses. The District Court and, subsequently, the Court of Appeal dismissed the claim on the ground that the Holy See enjoys immunity from suit. Claiming that their right of access to a court under Article 6(1) of the European Convention on Human Rights (ECHR) had been violated, the victims went on to file an application against Belgium at the European Court of Human Rights (ECtHR). On 12 October 2021, the ECtHR rendered its judgment in the case (J.C. and others v Belgium, only available in French).

In essence, in J.C. v Belgium, the ECtHR deferred to the Belgian courts’ application of the international law of immunities to the Holy See, considering it as neither arbitrary nor manifestly unreasonable. Repeating its long-standing position on the proportionality of applicants’ limitation of their right to access to a court (e.g., Al Adsani v UK, Jones v UK) the ECtHR held that measures taken by a State which reflect generally recognized principles of international law on State immunity cannot in principle be regarded as imposing a disproportionate restriction on the right of access to a court. For those who do not read French, the ECtHR has published an information note on the judgment in English. Also, my colleague Gilles Cuniberti from the University of Luxembourg has published a fine summary in English of the ECtHR’s judgment on the EAPIL blog.

In this blogpost, I reflect critically on three assertions that underpin the ECtHR’s judgment: (1) the Holy See is entitled to State immunity, as it is, or at least resembles a State; (2) the Holy See’s failures do not qualify as torts which trigger an exception to immunity; (3) the Holy See’s immunity is, or rather should be, contingent on whether it makes alternative remedies available to the claimants.

The ‘Statehood’ and Immunity of the Holy See

It is striking that, just like the Belgian Court of Appeal, the ECtHR applied the norms of State immunity to the Holy See. In fact, the Holy See is in itself not a State (its territorial base the Vatican is) but rather a universal religious organization with a sui generis international legal personality (see for such criticism of the Court of Appeal’s reasoning in this regard also Duquet and Wouters).

It is undeniable, however, that some States (such as Belgium) and even the United Nations, treat the Holy See as if it were a State (see, e.g., Court of Appeal Ghent, para. 3.2.4). Certain scholars have observed that the Holy See resembles a State (see Cismas, Chapter 4). Indeed, the Holy See has entered into multiple treaties, and it sends and receives diplomats. Both are attributes of international legal personality which it shares with States.

Nevertheless, this need not mean that the Holy See is itself a State, nor need it mean that it is entitled to immunity to the same extent as States. After all, in the Reparation for Injuries case, the International Court of Justice held that ‘[t]he subjects of law in any legal system are not necessarily identical in their nature or in the extent of their rights, and their nature depends upon the needs of the community.’ In fact, apart from the conclusion of bilateral agreements between the Holy See and a number of States, there is not much State practice which addresses the international immunities of the Holy See. While there is some relevant case-law in the United States, it is based on domestic law (the Foreign Sovereign Immunities Act) rather than international law. In addition, as John Morss has argued in EJIL, from a normative perspective, it is difficult to understand how the Holy See can legitimately invoke immunities that go with statehood if it does not embrace the responsibilities that go with it, such as its international responsibility in respect of sexual abuse scandals.

It remains the case, in any event, that especially in countries with a long-standing relationship with the Holy See, and with a significant presence of Catholics, such as Belgium, an institutional practice may have developed of functionally equating the Holy See with a State for purposes of the application of sovereign immunities (see also Zambrana Tevar, p. 48). Possibly, there is a rule of regional or special customary international law according to which the Holy See enjoys immunity in particular countries.

If the international law of State immunity applies to the Holy See, this also means that claimants can invoke accepted exceptions to sovereign immunity. The relevant exception for sexual abuse claims is the ‘territorial tort exception’, which is codified in Article 12 of the European Convention on State Immunity as well as Article 11 of the UN Convention on Jurisdictional Immunities of States, which can be considered as reflecting customary international law, at least outside a situation of armed conflict (see ICJ, Jurisdictional Immunities of the State). In line with these provisions, a foreign State cannot invoke its immunity in relation to tortious acts, such as abuses, which took place on the territory of the forum State and are attributable to it.

The Belgian Court of Appeals ruled that the criteria listed in these provisions were not satisfied. More in particular, it held that the Holy See’s acts or omissions did not occur on Belgian territory, and that failures of the Belgian bishops could not be attributed to the Holy See since the Pope is not the principal of the bishops. The ECtHR did not consider this reasoning as arbitrary or unreasonable.

However, as judge Pavli has observed in his (sole) dissenting opinion, the ECtHR could have engaged at greater length with whether these assertions are persuasive. After all, the Holy See’s failures may have affected persons present on Belgian territory, even if the Holy See is based abroad. Also, given the hierarchical organization of the Church, it is not obvious that there is no principal/agent relationship between the Holy See and the bishops.

The Contingency of the Holy See’s Immunity

At the end of its judgment, the ECtHR ascertained whether any alternative remedies were at the disposal of the applicants. Admittedly, it did so only in an obiter dictum, after recalling that a grant of State immunity does not depend on the existence of alternative remedies. It is nonetheless striking that the Court considered it desirable (souhaitable) that the Holy See’s immunity be contingent on the provision of alternative remedies. In so doing, it imported a test which is normally applied only to the immunity of intergovernmental organizations (see the Court’s seminal Waite and Kennedy case). The Court based the application of this test to the Holy See on ‘the serious interests at play’ and ‘the gravity of the sexual abuse’. However, under international law, such considerations do not normally trigger a restriction of sovereign immunities. Rather, it appears that the Court had second thoughts regarding its application of the international law of State immunity to an entity which is not a State after all. It may have been influenced in this respect by the applicants’ arguments that the Holy See is an international public service or an international organization, rather than a State. In any event, in case an international entity’s statehood is in doubt, such as the Holy See’s, it appears as defensible to apply a contingent immunity test, at least insofar as it enjoys international legal personality.

Applying the contingent immunity test, for that matter, the Court found that applicants had the option to sue officials of the Catholic Church rather than the Holy See before Belgian courts, but that their actions had failed to produce results because of ill-advised procedural choices they made themselves. Because applicants had alternative remedies at their disposal (which they did not properly use), the Holy See was entitled to avail itself of its immunity, according to the Court. I will not comment on whether applicants could have successfully sued officials of the Church had they made other procedural choices (which is a question of Belgian procedural law). However, it is remarkable that the Court considered a suit against Church officials as an acceptable alternative remedy to a suit again the Holy See itself. Clearly, for applicants, holding the Holy See – which sits at the apex of the Catholic Church – to account, has much more symbolic value than holding a clergyman accountable.

After the ECtHR’s judgment in J.C. and others v Belgium, lawsuits against the Holy See brought in domestic courts of ECHR Contracting Parties are unlikely to be successful. This is unfortunate, insofar as such lawsuits, when reaching the merits, could shed light on the ultimate responsibility which the nerve-center of the Catholic Church may bear for clerical abuses. Nevertheless, the media attention which the judgment has generated may bring additional pressure to bear on the Church to more systematically and decisively investigate abuses than it has done so far. The victims deserve no less.